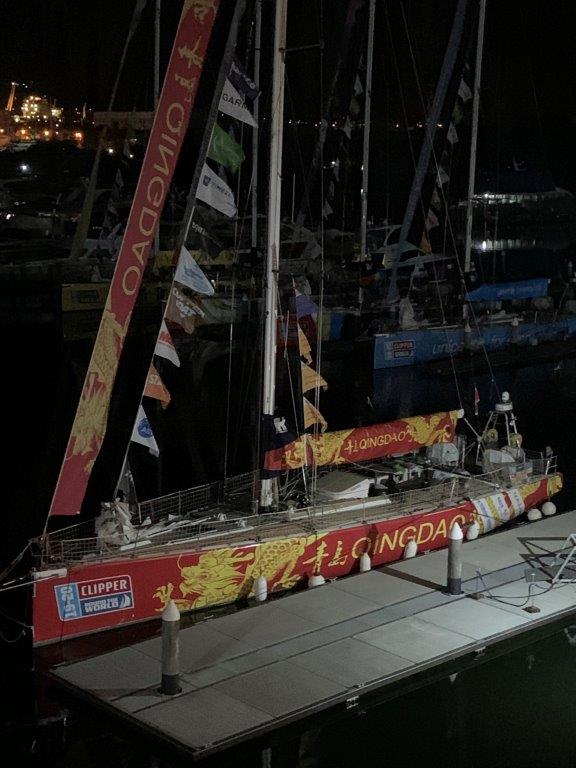 Today the fleet set off on the second Subic Bay circular race (Race 8? The Clipper website is calling it Race 9, I must have fallen asleep) so you really do need the results of Race 7. Before we get to that, I thought I’d give you my cultural hits for this month. On my flights over I watched the whole of Gemini Man (about clones with Will Smith, young and old, which I’d started on the way home last time), Judy (about Judy Garland on her last UK tour in 1968, the year before she died, starring Renee Zellweger) and Blinded By the Light (featuring the music of Bruce Springsteen). All easy to watch so maybe not too cultural. I am finding that reading on a Kindle is not as enjoyable as a real book, so I’m not devouring books the way I normally do. I had been looking forward to some real culture during my seven weeks in China but thanks to the Covid-19 coronavirus outbreak the nearest we made to it was drinking Tsingtao beer in the Chinese restaurant in the yacht club. In case you didn’t know, Qingdao is an alternative spelling for Tsingtao, China’s second largest brewery set up by German settlers in 1903. (I may have told you this earlier, my memory is not so good with all this time travel I’m doing).

At the Prize giving we all had great fun, beer balancing, swimming in the pool and dancing, both before and after swimming. I have lots of photos but I’m planning on using them as blackmail material when I fall down on my uppers (a saying which has something to do with being so poor that your shoes are worn out?) so I’ll only share this one. Very impressive when you consider they probably haven’t even lost their sea legs yet.

The next morning, we saw that someone had climbed the mast of Qingdao and placed an unusual item up there! If it’s not too clear in this photo: it’s a chair.

Before I tell you the results, I don’t think I mentioned the penalty points incurred on Leg 4, which were announced last week. IYK had two for sail damage, Unicef one for a lost sail and DTL one for winch damage.

Remember that this race had two Ocean Sprints (North and South) and boats had to opt for one of them. Qingdao and WTC Logistics were lucky in that they were the only two to opt for North. WTC scored three points and Qingdao two. The rest of the fleet opted for the South Sprint: PdE came first with three points, IYK second with two and Sanya third with one.

The race itself was cut short due to lack of wind. Two alternative finish lines were set before the official one and at some stage, when it looked as though few would get back in a reasonable time, one was chosen as the finish line and everyone could then motor in. The results were decided by where the boats were at a certain time (based on a photo they had to take of their Nav Station). Qingdao, Unicef and IYK had already passed the line so they were first, second and third. Sanya was very unlucky in that both IYK and PdE overtook them, so PdE was fourth, Sanya fifth, Zhuhai sixth, followed by DTL, GTB, HLB and Seattle.

There were two Scoring Gates, either side of the rhumb line. To my amazement, as already mentioned earlier in Post 76a, the first three boats went through one then the other, resulting in Qingdao getting six points, Unicef four and Sanya two. Great work from them.

Final total points: Qingdao 97, HLB 77, PdE 60, Sanya 56, Unicef 51, IYK 50, WTC and DTL both 42, Zhuhai 34, GTB 33 and Seattle 28. Qingdao have increased their lead but there are still seven races left (ah, this is Race 9 so that the numbers of the remaining ones stay as they were originally). Unicef have gone up from sixth to fifth but IYK are very close.

When they set off this morning, I noticed something else that had happened to Qingdao. In case you can’t spot it, compare the back of the boat (stern?) with that of Unicef above.

The majority of the supporters and Clipper staff have left The Philippines to go back to normal life. There are three of us (that we know of) still here. Two of us (Becca and me) are going off to sit on a beach for a couple of days while this race is on. This is the view from my hotel room now.