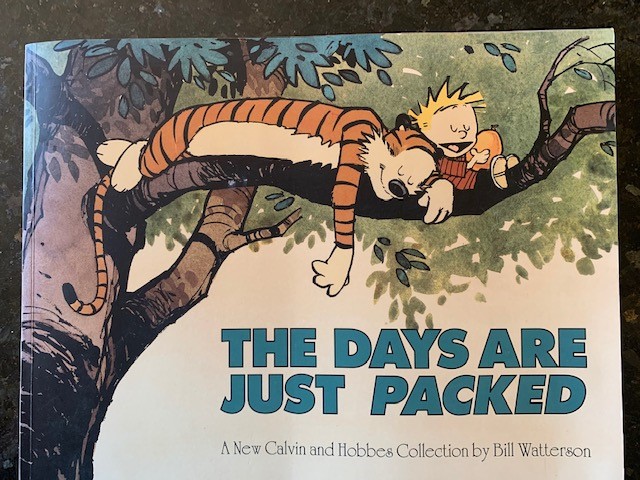 If you look at the header (on the website) you’ll see this is a book title, of cartoons created by Bill Watterson. Although possibly considered books for children, they have a great deal of thought in them, as you’d expect when the two protagonists are called Calvin (a small boy with boundless imagination) and Hobbes (his toy tiger). I love them.

A short week this one, but life has been non-stop, even under lockdown. I was considering called this Post “The Birds” as we’ve had a wretched corvid trying to get through our windows. At 05.30. The first morning, I thought it was someone hammering on the door and could not work out what emergency would bring someone down to our place at that time of day. Once I woke up fully and realised it was someone hammering on the (first floor, west facing) window I sent JD to investigate. (Note to any American readers: the first floor is upstairs). He came back and told me it was a crow, which flew off when it saw him. An hour later it was at another window on the second floor (the attic). This hammering kept happening: it followed JD to the (south facing) bathroom then to the other end of the house on the ground floor. Scary. I’ve read something about crows being Messengers of the Gods or Harbingers of Doom or some such.

My mood was not lightened when JD said he didn’t think it was a crow, it had a yellow beak. Um, a blackbird was all I could think, a huge mutant blackbird. We do have Hinkley Point not far away after all. I know it’s not operational but who knows what experiments they are undertaking? Anyway, JD insisted that it was NOT a blackbird so I got the bird book out and looked at corvids and we settled on it being a rook. I’ve not been able to get a photo of it so you’ll have to use your imagination. Here’s a jigsaw I bought for the lockdown that I’ve just got around to, instead.

After the second disturbed morning action had to be taken. I’d read that hanging CDs would scare birds. I couldn’t hang them from anything so I stuck them on the window. There is a pear tree growing up that wall so we cut back the branches in case it was balancing on them. All that happened was that the next morning, The Bird showed its contempt all over the window. I’d also read that sticking clingfilm on the window would stop the reflection which was the cause of the attack. We couldn’t get access outside so improvised with a plastic lid. Here’s a shot of Day 3 (I think, lack of sleep means it could be Day 4). You can create the different stages in your mind’s eye.

This morning, still a hammering. I’m now sleeping through it but disturbed nonetheless. The latest action taken is in the next photo. I’m worried about the window glass, these are old windows so that glass is sometimes thinner than usual. You’ll have to wait until next time to know if this worked.

Enough bird talk. We had another visitor this week, a pal who had been out walking and was on her way home. Once again we kept a few feet apart but the dogs didn’t think this was necessary, this was one of their friends. Hugs all round for them. The next day, even more excitement, the window cleaners came! We’ve not seen them since before our Clipper adventure started last August. They had been off work for the main lockdown but were now able to clean the outside of the windows. This has had the downside of highlighting how mucky the windows are inside. Luckily, our cleaner is planning on coming back soon. She’s been bringing the odd food parcel for us on her way past but too early in the morning for us to catch up. We’ll need to devise a one-way system around the house to avoid meeting up.

All the plants I potted on last week have survived both my rough handling and the lack of rain. Now, I may have got a bit carried away with the tomatoes, but in my defence, m’lud, I did not expect them all to germinate. My beetroot seeds certainly haven’t and I’ve always done really well with them. Thinking positively, we may be able to corner the UK market once imports stop, due either to Brexit (remember that?) or Covid-19.

Cocktails: last week we had Bitters as the topic. This week, it’s another bitter drink but only 25% as opposed to the 40% of the previous ones. The bottle size reflects this.

In doing my research on this, for the first time I came across a reference to Covid-19. and what the company is doing to help. https://www.camparigroup.com/en/covid-19. The Campari group seem to be very active so go out and buy more! On entering the relevant part of the site I found that they also have Aperol in their stable (see Post 91 dated 9th May for that recipe). Campari, today’s drink, was created in 1860 using herbs and fruits in a secret recipe still in use today (I think I could cut-and-paste that phrase for many of our drink ingredients). The two classic cocktails utilising Campari are the Americano (no coffee involved) and the Negroni. Forget them. I went through my list and came up with a first pass selection of 18 possible cocktails. Tempted though I was with “Combustible Edison” (brandy, Campari and lemon juice) I decided not to tempt fate by encouraging you to play with fire. Literally. Think Christmas puddings and you’ll see where this is going. For those of you who do not have Christmas puddings, you are missing a real spectacle every year. Come back in six months and I’ll see if I can get a photo for you.

The first one I made is called Bitter Evan, I’m not sure why, but made it to remember friends we’ve not seen since the boats sailed from London. Mix 45 ml vodka with 15 ml Campari and top up with pink or red grapefruit juice. The first had some spiced vodka I’d made a couple of years ago, then as we had juice left, we had a second, with normal vodka. We managed to finish off the spiced vodka plus another bottle with about an inch at the bottom. At this rate we could finish off our bar by the end of the year. Here’s OBB enjoying their first glass.

I’d also put pomegranate juice on the shopping list. As JD managed to buy both juices, we’ve had two cocktails this weekend. The second was chosen because I thought the name reasonably appropriate, not quite quarantine but almost: Diva Quaranta. Mix 45 ml gin, 15 ml Campari, 30 ml pomegranate juice and 15 ml simple syrup (I used one I’d made a few weeks ago for another cocktail, with pear eau-de-vie, but I now cannot find that recipe, sorry). This was pretty strong so we only had one, while JD was preparing supper last night. Afterwards we managed to see the Crew Dragon fly (?) past in the night sky. If you’ve missed it, this is the first commercial manned space flight to the International Space Station, funded by Elon Musk’s SpaceX in conjunction with NASA. We watched the launch while eating and saw it pass us in the night sky a couple of hours later. Here’s an easy guide to it https://www.bbc.co.uk/news/science-environment-52840482.

But, even more exciting than the cocktails and (maybe) Crew Dragon, I went out! On my own! In what is now the family car (formerly JD’s), as I don’t have one any longer. Thinking I’d be away for the year, I sold mine last August and haven’t driven since. When out I was not alert enough to take a photo so you’ll have to believe me when I say I drove into Castle Cary and went to the shops. I found out that you can now pay up to £45 using contact-less cards: last time I shopped it was £30. Both the car and I survived.

No lambs today, but here is a caterpillar I photographed. I thought it might be a Red Admiral as they are fluttering all over the plants but looking in my butterfly and moth book, it doesn’t appear to be. I’ll let you all see if you know before I reveal it.