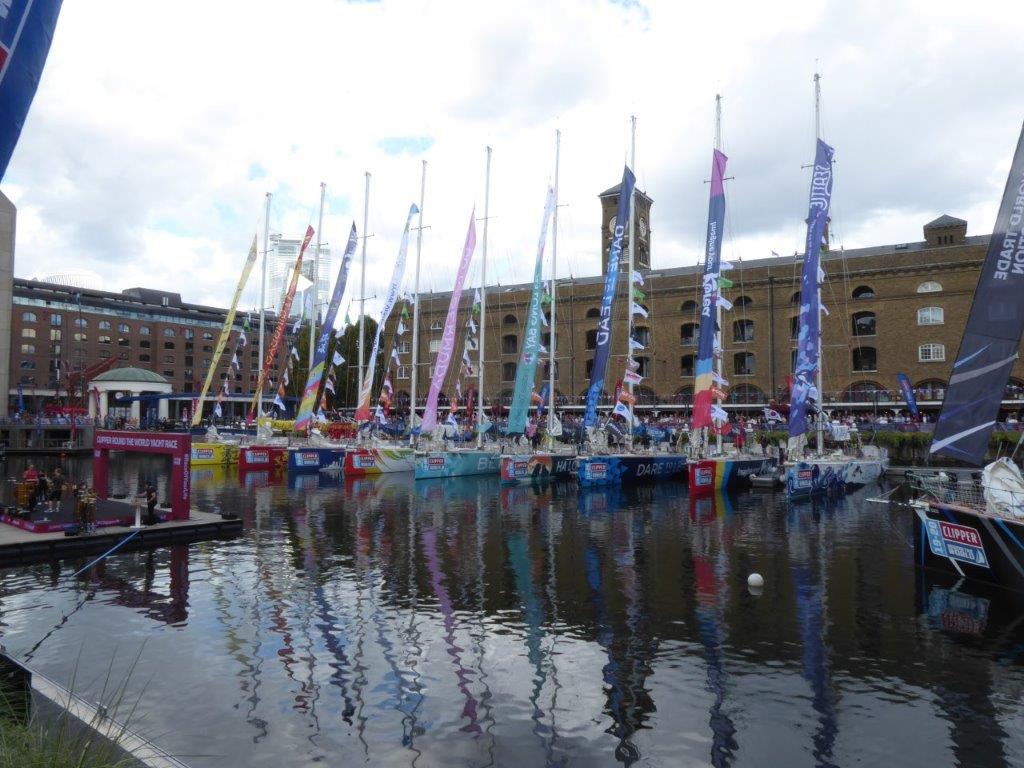 I know, you’ve only just digested my last missive and here’s another. This one is mainly associated with Clipper though, as the fleet have now set off for Seattle. Today’s header is them all in London in September 2019 before they set off for the first half, not that we knew that then. I said I’d try to tell you how many are on each boat. Here’s the link to some photos of them setting off this morning.

If you compare it to earlier races, you’ll see that the boats have fewer crew. JD says this is good, he’s not having to hot bunk. It is a bit odd, not seeing George in any photos, but I’m glad I’ve only got one of them away this time. This is the most trying leg as well as being pretty long (they are due to get to Seattle around Easter, mid-April) so home support is good to have (from you all as well, I do appreciate your comments and contact).

You can see Unicef and JD in photos 60 then 98 to 100 (if they’ve not changed them since I typed this). In the middle photo of the three he has his mouth wide open: he was leading the Unicef chant, which you can hear in the Facebook video link below. Looking at the photos and race team information on the Clipper site, I think I’ve got the numbers pretty close. As a reminder, here are the boat numbers, skippers, AQPs (Additional Qualified Person, first mate) and numbers of crew this leg and circumnavigators. A lot of new names to take in, only Unicef has a Skipper and AQP who sailed together before the pause for Covid. I’m not going to be able to furnish new photos so the ones scattered around this Post are of the fleet leaving London so long ago.

CV20 Imagine Your Korea (IYK). Skipper Rob Graham, AQP John Chambers. Eight Leg 6 crew, seven circumnavigators, making a total of 17. I could only see 15 in the leaving photo so I’m not entirely convinced of the true number. (This applies to other boats too).

CV22 Seattle. Skipper David Harthorn, AQP Hannah Brewis. Nine Leg 6 crew, three circumnavigators, total 14 although there were 15 in the leaving photo. Must have a stowaway!

CV30 Qingdao. Skipper Chris Brooks, AQP Bruce Anderson (who had been on Unicef as a legger). Ten Leg 6 crew, three circumnavigators (no George this time, maybe he’ll come back as an AQP in a future iteration), total 15.

CV24 does not exist: it was written off in the previous iteration. I don’t think I’ve ever told you about this. It grounded within 24 hours after leaving Cape Town on 31st October 2017. As it had gone aground on a nature reserve, I’m told they were not allowed to salvage it as this would cause more damage to the reserve. Instead, it was left to break up (leaking all the fuel that was on board). Here’s more information if you’re interested (and it is interesting).

If you go onto the Facebook live feed, you’ll see JD being interviewed at about 14.47 minutes in this video, plus some others of them setting off from Subic Bay. Let’s hope that this time, they do get further afield. I’m sure they’ve had enough of sailing around these islands.

Another recap, this time of the standings. We have Qingdao first on 102 points, HLB second with 91, PdE third with 74, Sanya fourth with 65, Unicef fifth with 58, IYK sixth with 54, WTC and DTL joint seventh with 47, Zhuhai ninth with 40, GTB tenth with 39 and Seattle eleventh with 37. However, the top three have already played their Jokers so that could change. Both Unicef and IYK are playing their Jokers this race: they will double whatever points they get so are hoping to move up the chart. Remember we’ll also have Scoring Gates and Ocean Sprints where the first three get extra points (which don’t get doubled). Then the delights of Stealth Mode where we lose them for 24 hours. There’s more on this in Blog Post 18 dated 6th March 2019 (three years ago!).

Just in case you missed it last time, here’s the link to the race viewer, which updates every hour or so. The white line is the “ideal” track to take (rhumb line) but obviously the wind and tides don’t always allow this to be followed. There’s a little green line which is the race start and two red lines close to Seattle are the Ocean Sprint “gates”.

They’re not racing yet so don’t get excited by the relative positions, that will come from Thursday 24th. Unicef is the mid blue and if you’re still supporting the George-less Qingdao, that’s red.

Enough boating. Here’s some of what I’ve been up to.

Listening to Radio 3 the other evening I heard something that made me want to listen to more. Easy to listen to but uplifting at the same time, just what we need in these troubled times. Here’s the link to the Finnish accordionist Maria Kalaniemi. You can practice your Finnish at the same time! She’s on Spotify and YouTube.

Closer to home, I recently read Gentian Hill, by Elizabeth Goudge. I hadn’t realised there was a local connection: she was born in Wells. She lived from 1900 to 1984 so her books are of a different era: although described as romances, I’m not sure we’d consider them so. Much gentler than books of today.

In the newspaper last year, there was an article giving some dietary advice on how to boost your health. This sounds interesting, I thought, let’s have a gander. It might be something to try while I’m on my own to make sure I keep my strength up for all the extra jobs I’ve had to take on now that we’re one down. Can’t expect the dogs to take out the rubbish (a Boy Job, as explained by Theresa May when she was Prime Minister).

First, even before it tells me what to eat, I should go on a ten-minute walk after eating. I can try that, especially now the sun is shining and the days are getting longer. Second, reduce salt. I get most of my salt in the bottled water I drink as I don’t like the taste of the stuff out of the tap. It’s well under the daily recommended amount as I don’t drink gallons. Third, every day eat yoghurt first thing (to control blood sugar) an orange (for eyes), an avocado (to lose belly fat), two apples (to lower cholesterol), five prunes (for my heart) and nuts (for fibre and my heart, again). I usually have yoghurt and fruit for my lunch but not that amount in one go. Also for blood sugar regulation, eat the carbohydrates last. That’s OK, I’ll keep the pudding till the end. Finally, have a glass of warm milk before going to bed.

NO, I cannot do that unless I’m allowed to add cocoa. Plain milk is something I do not like, possibly due to the early school years where we had a little bottle of the stuff every day. If the weather was too cold and it had frozen, they warmed it to tepid for us. I’m told that some children sucked it like an ice lolly but maybe we didn’t have enough break time for that. I’m not sure how it would work with the shape of the milk bottle anyway. Margaret Thatcher, first female UK Prime Minister, was famously known as the Milk Snatcher due to stopping this when she was Education Secretary in the early 1970’s. I’d have worshipped her for doing that if I was still at school!

This all sounds a bit too organised. I assume you’re allowed other stuff, not just what I’ve listed above. I’m still buying food for two, although that should be rectified shortly when I start taking a shopping list and actually reading it. I think I’d rather try the 5:2 diet, where you don’t eat much for two days of the week, or intermittent fasting, where you seem to eat as much as you like over an eight-hour period, so your body gets no food for 16 hours every day. Sounds easier but that’s a lot of time to not nibble. I think I’ll stay with my cocktail diet. Trouble is, being on my own, I’ve not got a recipe for you this week. I’ll work on it. Meanwhile, here’s a happy JD about to leave Subic Bay.