So what else do I need? Before we get to that, let’s look at the other two teams. 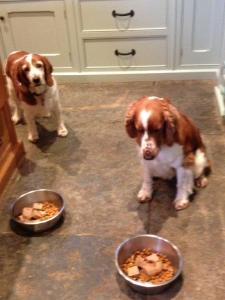 “As long as we’ve got food we’re OK”. And maybe the odd cuddle. Anyone will do.

Polly? She goes out and catches her own. I was about to put up the latest of her catches but didn’t want to put you off your food. Actually, she could catch for the whole family. Here is Grace eating the tail of a squirrel (grey) that Polly caught and presented to the pups earlier this year. 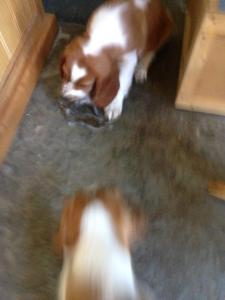 The easy option. Be where you’re told to be at the right time. Check passports are valid. Don’t think these are!

Buy lots of sailing gear. Go on Training Week (TW) One. Buy a little more. Go on TW Two. Realise there’s still stuff left at the Musto shop and buy some more. You think I’m joking? If you came to our house the first thing you’d think is that you’d accidentally strolled into the Musto showroom. Thankfully we now have a break until February when TW Three starts.

Get fit. I don’t know what George is doing but John has doubled his daily swimming and is attending twice-weekly classes at his local physio place. They will need a degree of fat to carry them through I suspect, but they’ll also need a good core strength to last the year. Will the clobber he’s already bought still fit or will he need to go on another spending spree?

In an earlier post I said this was the soft option. Well in one way it is but it’s not the easy option. We don’t yet know the exact route except there will be three Chinese ports (more on these later). We don’t know the timing. Without these I cannot book any travel or hotels. There will probably be internal flights in China if I’m to do all three ports. I can’t ask any of my companions to commit without this information (I know they’re good friends but…). On some legs I may find I don’t have time to get back to the UK before the next stop (or I get back long enough to turn around for the next flight). The odds on the Clippers arriving on the same day are probably minimal so I need to plan to arrive for the first possible date to wave them in. The leaving date is usually set so I’ll know when to wave them out (just like the UK and Brexit! Or not).

So far my planning consists of finding the guide and phrase books in the attic that could be relevant. The first leg to South America could be Portuguese or Spanish, neither of which I speak except to read a menu. So there’s two languages I need to make a start on, Mandarin and one of the South American ones. Maybe I make sure the relevant companion speaks the relevant language?

Next, luggage. As we don’t know the destinations or timings I don’t know what clothes to pack. I’ll probably also be asked to bring stuff out by the intrepid travellers. So, I need hold bag(s) plus a carry on. I went shopping to my nearest discount store the other day and found this:

Big enough to get a pair of shoes and wash bag in plus spare knickers. Ever since I spent the first three days in Jordan borrowing John’s clothes because my bag had gone walkabout, I make sure I’ve got enough with me to survive long enough to get to the shops. When I got the bag above to the checkout, look at the name!

A smattering of the language,

Touristy stuff to do whilst MBB are cleaning then re-equipping their boats,

A hotel with two or three rooms for maybe a fortnight (no doubt George would like to stay in the same FIVE STAR HOTEL), and

Next time, back to MBB and their training.

View all posts by farncombesam

2 thoughts on “05. The Bare necessities”