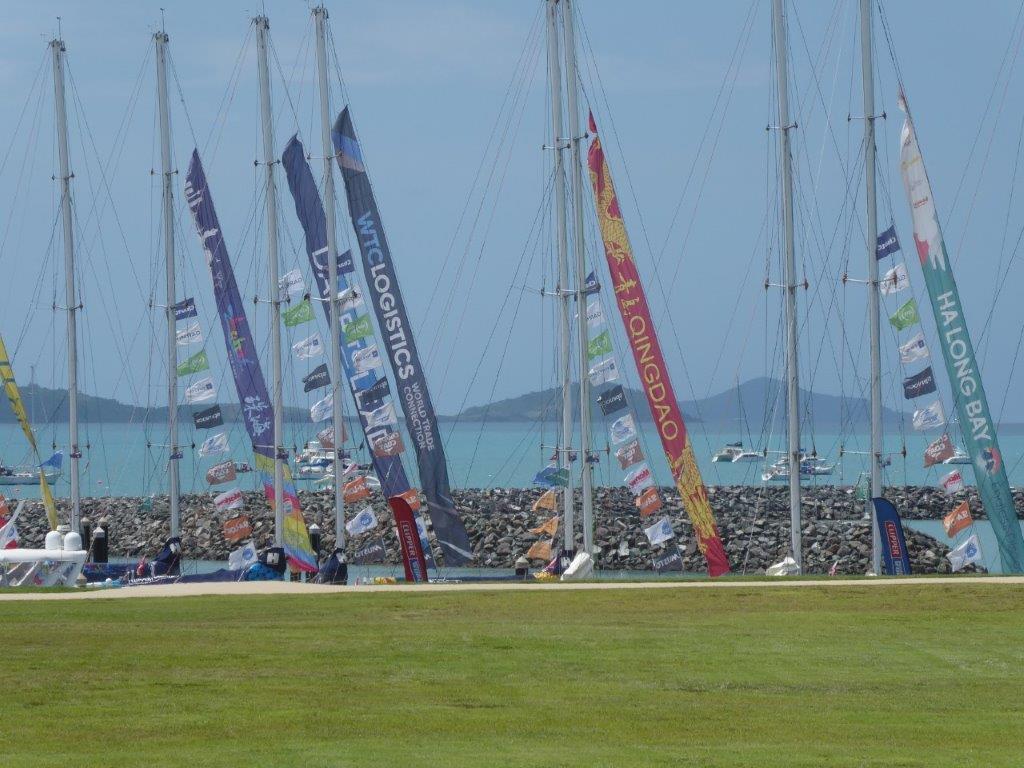 This race, being race 6 and the start of Leg 5, is certainly off to a slow start. This race was meant to start on Saturday 18th January, the day I left. The plan was to have the Parade of Sail (PoS) then motor beyond the Great Barrier Reef after which there would be a Le Mans start (see below for explanation of this if you are interested). John went off to the Unicef boat to prepare. About an hour later I had a frantic phone call: “can you book me back into our room for another two days? The start has been delayed”. I rushed down to reception where I was told I was the third in as many minutes! Mission accomplished, I proceeded to tell other supporters what was going on. Three or four water makers had broken down on the way into Airlie Beach and the spare parts had not arrived in time but would be there shortly. The PoS would go ahead then the whole fleet would return and go out when they were all ready. The good news was that all crew had a spare day with NO TASKS! The fact that I was not there probably made it even more relaxing. If you read the official announcement on the Clipper website you’ll see that Sir Robin downplays the situation: he “averaged a litre a day for 312 days but… in these days people expect more”. He doesn’t say whether his litre included the beers and brandy he took with him (see his book “A World of My Own” for his epic trip 50 years ago).

The fleet left Airlie Beach properly on Monday and duly motored beyond the Great Barrier Reef through Hydrographers Passage, a deep-water shipping channel discovered by Lieutenant Commander James Bond (not that one I’m afraid), of the Royal Australian Navy survey ship HMAS Flinders, in the 1980s. H.M.A.S. Flinders was awarded the Royal Geographic Society of Australasia’s J.P. Thomson Foundation Medal as a tribute to its accomplishment — “a valuable and permanent benefit to Australia’s maritime trade.” Commander Bond, on behalf of the officers and men of Flinders, accepted the gold medal from H.R.H. The Duke of Kent in Brisbane in April 1985. (Ref. Through the Barrier — The Hydrographers Passage Story by John C. H. Foley Presented at a meeting of the Society 27th August, 1987). https://espace.library.uq.edu.au/data/UQ_205745/s00855804_1988_13_5_171.pdf?

Back to the race. The Le Mans start is used when it’s not safe or convenient to have the usual start, and was developed by Clipper. In essence, once it’s safe to do so, all the boats get into a straight line two to three boat lengths apart, (in an order decided by Clipper at the Crew Briefing before they leave port) with the Lead Skipper in the middle. All the crew on every boat are at the back of the boat until the signal is given, then they rush forwards and sort out the sails and start racing. Full details can be found here: https://www.clipperroundtheworld.com/uploads/annex-a-to-clipper-2019-20-race-sailing-instructions.pdf

Another useful bit of information comes in Jeronimo’s skipper report of 23rd January on what happens when the fleet come into a stopover. Much as the crew would like to rest, you’ll realise from previous posts in this blog that I don’t get to see MBB much during the day. Here’s why: https://www.clipperroundtheworld.com/skipper-report/punta-del-este/race6-day4-team42 although I think only two days for victualling is optimistic. And the second part: https://www.clipperroundtheworld.com/skipper-report/punta-del-este/race6-day5-team42

What’s that I hear? An anguished cry around the world? Enough about the bally boats! We didn’t sign up to this blog to hear all this sailing guff. Where’s our intrepid narrator? Last we heard, she was celebrating her birthday all alone and deserted by MBB (OK, am I overdoing this aspect? Too much martyrdom?).

Fear not gentle reader. I survived the beautiful Whitsundays, neither eaten by a shark nor stung to death by the dreaded “stingers” (don’t you just love the Australians? Why use confusing names when a simple word will do). These are the Irukandji and Chironex fleckeri or Box Jellyfish. A sting can be life-threatening. It’s recommended that if going into the water (even paddling), a full Lycra body suit is worn. By the beach we saw a BIG sign warning people, if stung, to wash the area with two litres of vinegar and call medical help immediately. At the side of this sign was a holster with a bottle of vinegar in it. I should have taken a photo but instead you’re having to put up with the sights of Airlie Beach and the yachts.

But I digress. Airlie Beach was the perfect place to do nothing but sunbathe (for health reasons, to top up vitamin D you understand), eat, drink, read books (More Abell Men, a local book; The Outside by Ada Hoffmann, an interesting SF book about AI; and Sunfall by Jim Al-Khalili, who is at my alma mater of the University of Guildford) and swim. All of which we did. As well as a bit of work for Unicef crew, sail repairing and victualling, as you can see from the photos in this post.