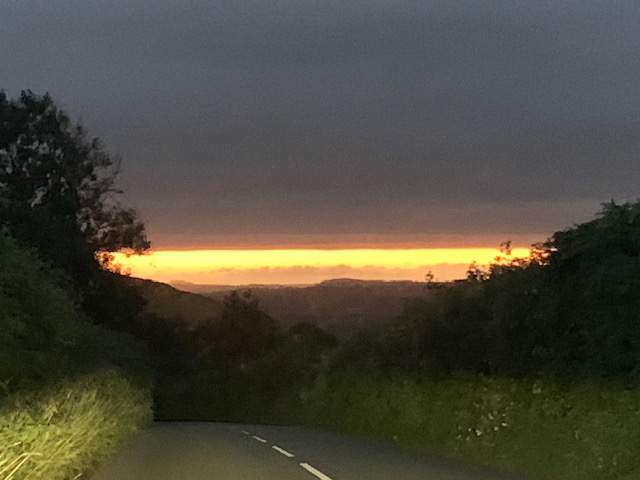 Today I’m bringing you the Travel and Gardening supplements. First, the Travel.

We’ve been quite the gadabouts this last week, you’d think everything was normal (the old normal, that is, not the new normal). At what stage do we come to think that the new normal is merely normal normal, I wonder?

We had Friday night dinner out, at Roth Bar and Grill, as mentioned at the end of my previous Post. This was not quite as relaxing as in the past, all the staff wore masks and there was a one-way system to get anywhere, but we were indoors, in a restaurant, eating a really good meal: two enormous steaks and chips, which we’d never have at home. The only worry was that JD was under a bit of a threat from the local artwork, see above. On the way home there was the most unbelievable front, which you can see in the header to this Post.

The next morning it felt very strange taking the beasts to the kennels for their first holiday for a while, and then packing: what do I need? The instinct has totally faded. What do hotels provide these days? I don’t think I need my passport for Cornwall, but what about other ID? What do I have, my driving licence? Normally all my cards are in my purse but I took them all out before travelling the world and now can’t remember which safe place I placed them in. No point looking for my National Trust card, you can’t just stroll in now.

Eventually we set off and managed to find The Nare, where we had stayed for our anniversary last year. (See Post 36 dated 11th August 2019). It was almost the same as last year, in fact even better service as the buffet for afternoon tea and trolley for dinner were not allowed, so we sat and were totally waited upon. (Even less exercise than last year, other than walking to and from our room). For the evening meal you get five courses, a couple are mouthfuls but the rest are not and include local lobster and a flambe dish every night if you wish, so what with afternoon tea as well we skipped lunch. After dinner we had my favourite cocktail (can’t skip those), espresso martini, which I am sadly unable to make successfully. Chatting to the owner, we found out that he should have been sailing around the British coast with a pal, popping in on every harbourmaster for a chat, as a way of raising money for Seafarers UK. https://www.seafarers.uk/news/sailor-to-circumnavigate-great-britain-visiting-every-harbour-master-in-aid-of-seafarers-uk/ We also had a very pleasant English fizz, in fact we enjoyed it so much we called into Knightor winery on the way home and bought some (plus a few other bottles, including their own Vermouth). As with The Nare, it’s a little difficult to find, but well worth the diversion if you are anywhere near St Austell. They were also selling Tarquin’s Cornish Gin so we bought a bottle of that (blackberry flavour). Lots of cocktail possibilities here.

We arrived home, unpacked, did the washing and had hair-cuts. Our hairdresser asked if we’d been to a new restaurant, the Clockspire, in Milborne Port. By the time my hair was finished, JD told me they had spare tables that night so off we went with our friends B & J. It was originally built in 1864 as a school, you can easily imagine Hogwarts. The building is a one-off, we just went “wow”, and the food, although not inspiring on the menu (on our phones), was superb. If you find yourself in the area, go. https://www.theclockspire.com/

Then we set off the next day for London. Our first call was to Val, George’s Godmother (who was with me in Airlie Beach, as mentioned last time). She had laid on the most splendid High Tea (which I think is what you call it when there’s savoury as well as sweet stuff. No, I’ve just looked and it’s when you have hot dishes as well as cold. We had a very splendid afternoon tea) AND she had a partly finished jigsaw, so I was in heaven! George joined us, we ate so much that we didn’t have an evening meal, just some cheese and biscuits. For those of you who know JD, you’ll understand that this is most unusual.

Saturday 8th August is significant for two reasons. As well as being the day the Clipper fleet didn’t arrive in London, it would have been my brother Dean’s 60th birthday. He died tragically almost four years ago, falling down the stairs in his home. His main legacy was probably the influence he had on biology teaching, working as he did at the NCBE (National Centre for Biotechnology Education) at Reading University. https://archive.reading.ac.uk/staff-news/spsn-712607.html. However, as a spin-off, he made special cocktails for significant events. The one I’m giving you today is to celebrate the Voyage of the Beagle.

We were in London for the Unicef Clipper reunion at what would have been the finish. To get to our destination we caught the London Clipper river bus, the first time I’ve been on public transport since coming back to the UK. Masks all round but much more acceptable than I think I’d find the tube. About a dozen of us met at Skylight in Tobacco Dock, apparently ‘London’s most imaginative rooftop bar’. https://www.tobaccodocklondon.com/skylight/ It is a disused car park with carpeting on the top floors and was buzzing. George says the whole area is up for redevelopment. We should have had two tables of six but a few more people turned up so we had to keep moving and going to hide in the loo to obey the current recommendations. It’s all very confusing.

On coming home, I am pleased to report that Tomatageddon has not yet hit us but Tatergeddon has. JD dug over the vegetable plot and we now have enough spuds to last the year. The tomato plants don’t look overloaded to me, with luck we’ll have a steady supply over the next few months as only a few seem to be ripening each day. By contrast, the fig tree is providing about a dozen ripe figs every day. Some are being grabbed by the wasps before I get to them but I have plenty for us.

I went back to my “slash and burn” gardening yesterday. One of the downsides of living in the middle of nowhere is the fact that mains drainage is not always available. We have fresh clean water coming into the house but all waste goes into a septic tank (or soakaway, I’m never quite sure of the distinction between them). We have three self-seeded plums growing near to it and when I went to pick a load, I noticed that a lot more self-seeded (self-stoned?) trees were springing up, very close to the system. Once I started looking, I noticed a couple of sycamores and an elder as well. I spent a happy hour cutting them down, and once the winter comes and we can see the ground, they will all be dug out before they threaten the integrity of our waste disposal further.

Finally, the Beagle cocktail. I’ve not made any this week due to being away but we have had this a number of times: it is VERY alcoholic but also very tasty. Dean came and made it for JD’s 60th (another link). I will make one for the coming weekend and raise a toast to Dean. The recipe is relatively self-explanatory, it links many places the Beagle visited.

I now have the cocktail sign so the bar is all ready! It is possibly even more tasteless and tacky than the previous one that Polly broke; it flashes. Do you think maybe she has better taste than me? (The black box is the battery pack. I’m hoping someone will make a little box for it and paint it the same colour as the wall. I can dream).