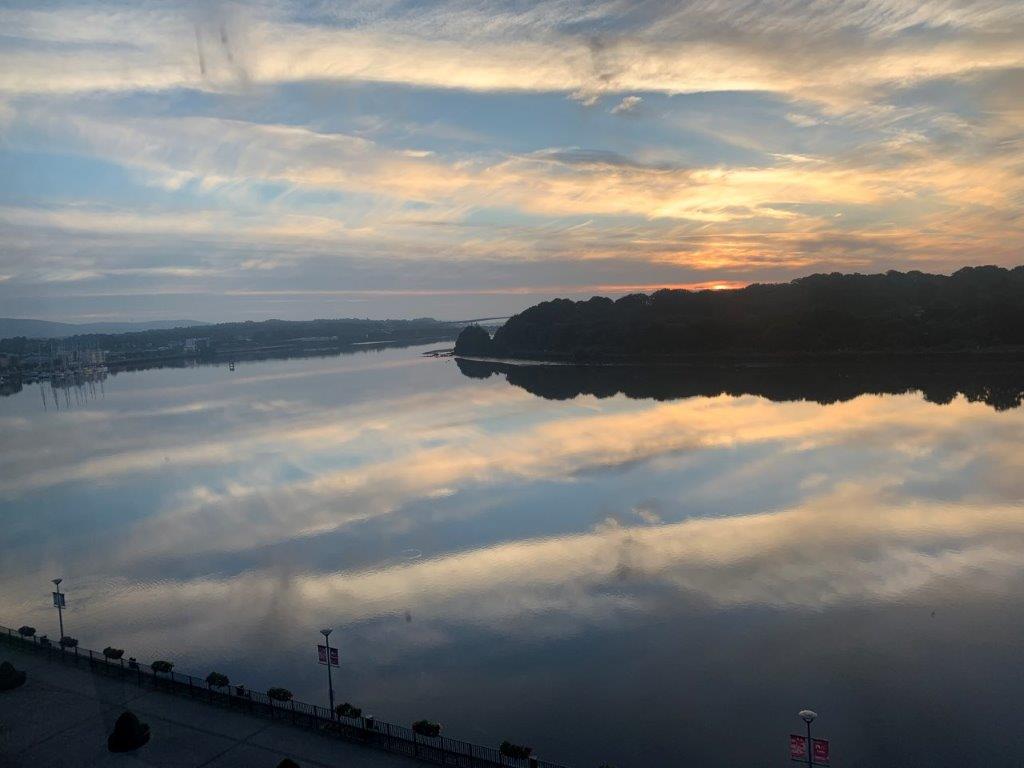 Last time I showed you a picture of the beautiful spectator boat seeing the fleet off in New York. It was modelled on the first winner of the America’s Cup, called America 2.0. What I didn’t know is that the captain had been in the Clipper 2013-14 race, and that one of the spectators on it was John Worby, Clipper alumnus 2015-16, and the father of Sarah Worby, currently on Unicef.

Race 14 was much too fast from New York, with the boats possibly arriving in Derry on July 11th and 12th, so they added an extra loop around Rockall and St Kilda. The boats still arrived earlier than expected, at the beginning of the window.

I managed to get to Derry after they had all arrived but in time for the prize giving, which was good as Unicef were on the podium in third position. As this is the last stopover, they also had all circumnavigators and all supporters on the stage for photoshoots. Had I known in advance, I’d have worn my two-tone Qingcef (or maybe my Unidao) tee shirt. You’ll see them in London. Of the 120 that set off to sail around the world in 2019, only 41 remain. Some dropped out around the course as it wasn’t for them, but like our George, many of them found the two-year gap too long for their lives to go onto indefinite hold. I could be doing this all over again in a number of years. By then there will be a new fleet, of fourteen 72’s I think.

Onto Race 14 results. First the Scoring Gate: GTB first with three points, WTC second with two and Unicef third with one. Then the Ocean Sprint: PdE fastest with three points, DTL two points and HLB one point. The overall race results were: GTB first, WTC second, Unicef third (I know I told them to come in first but they did a lot better than last time), PdE fourth, Seattle fifth (with their Joker so 14 points), Qingdao sixth, Sanya seventh (with Joker so 10 points), HLB eighth, Zhuhai ninth, DTL tenth (with Joker so four points) and IYK bringing up the rear with one point. I’m not sure if I mentioned penalties last time, but with all the numbers added up we now have an exciting Race 15 to London.

Qingdao are still in the lead with 136 points but biting at their heels are PdE with 127 and HLB with 125. WTC are fourth with 111, Unicef fifth with 106, Sanya sixth with 100, GTB seventh with 97, then IYK with 77, Zhuhai with 69, and Seattle and DTL tied at the end with 61 each. There will be no Scoring Gate but I understand that an Ocean Sprint has been added.

As everyone has now played their Joker, that’s a possible 14 points up for grabs. In addition, I’ve heard that there are still penalty points that have not been announced. Any of the top three boats could be the overall winner. Unicef could be anywhere from fourth to seventh, depending how well they and the others do. At least we’ve only got a week more to bite our nails. They set off on Sunday 24th and arrive on Saturday 30th July.

Many posts ago I was showing you the Qingdao compass that Donna was taking around the world. I’ve not been keeping up with the travel but the compass certainly has and here it is, a bit more battered than before, ready to be auctioned to raise funds for Unicef.