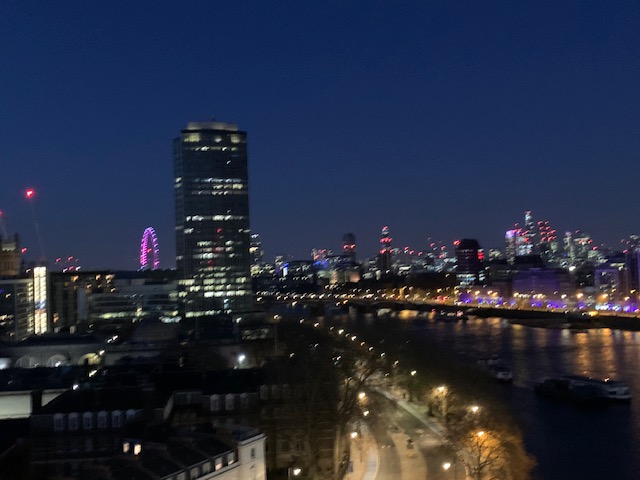 I’m not sure I’ll be able to think of enough punning titles, hence the number. Most of the ones I had ready to use were related to sailing, oddly enough!

Day 0. Thursday 19th March 2020. I’ve mentioned this in Post 81 dated 20th March. Our wonderful driver Denis bought some essential supplies. We got to the flat and took an inventory of stores: one bottle gin, twelve cans tonic, nine bottles champagne (left over from John’s 70th birthday party), some Portuguese and Uruguayan wines bought to remember the first two Clipper stopovers. And the almost obligatory open bottle of sherry, in possibly every fridge in England, left over from some Christmas or other. Enough to drink then. Two tins sardines (another British favourite), one smoked oysters (to go with the champagne, dahling) and a bag of porridge oats. Plus two packets of biscuits from one of the boats.

Three tubes of toothpaste, shower gel, deodorant, shampoo. We will not be replicating Clipper fleet conditions, I’m glad to say. Twenty five toilet rolls. Lest you accuse me of being a hoarder (before we even knew there would be a run on them), let me explain. After I returned from Punta del Este I realised that, without a car, I would struggle to buy all the usual household items. I therefore ventured onto the computer and into the dark arts of online grocery shopping. Gosh, that was exciting! Long-life milk for when I arrived home on a 4.30 am flight, bottled water, washing powder and conditioner, toilet cleaner, and toilet rolls. When I came home the second time, after Cape Town, I was so impressed with my new-found ability that I ordered other stuff like biscuits and Earl Grey teabags and goats cheese. Unfortunately, I somehow managed to press some button that also repeated the whole of my first order. A big shock and embarrassment at the time but what a relief now. If necessary I can become a black market spiv and wander the streets of London with a loo roll hidden under each arm. Just imagine me being George Cole as Flash Harry in the original St Trinian’s film. Or James Beck as Private Walker in Dad’s Army if you’re too young for St Trinian’s. Whilst we’re all house bound, why not get the box sets? Innocent films for innocent times, although somewhat at odds with modern sensibilities.

Sorry, where was I? Ah yes, day 0. George went and did a bit of shopping and we coped with being stuck in a two bedroom flat with all the sailing paraphernalia of two Round-The-World sailors. Spread everywhere. Including the balcony and bedroom floor. Bought some lasagne meals from Cafe Society, at the bottom of the flats for supper.

Day 1. Friday 20th March. We unpacked and sorted stuff as best we could. Looked out at the view a lot. Did some exercises (George is taking this very seriously). Piano practice for both George and me. At 6 pm, it was announced that all pubs, restaurants etc would have to close until further notice, apart from doing takeaways.

Day 2. Saturday 21st March. I went down to Cafe Society and bought some cake to go with our afternoon tea. (There are scones in the freezer but we might need them in the future). The owner said he’ll stay open for the people in the building as long as he can. I suppose that technically I went outside, but only five paces. George went out to see what food he could find: there was a rumour that pubs would be selling off the surplus food they had bought in for Mothering Sunday this weekend but no trace was seen, all pubs locked up. He did very well though, one of the local supermarkets had enough for him to bring back food for a roast beef dinner. The only thing missing was Yorkshire puddings but we can survive. We ordered an Indian takeaway from Millbank Spice for our evening meal to celebrate, but as they didn’t deliver George had to pop out again. Exercises and piano practice.

Day 3. Sunday 22nd March. Mothering Sunday. The first “event” that MBB have not missed since they set off last September! George gave me a card and mid-morning a box from the Hummingbird Bakery arrived, with a massive lemon and raspberry cake inside. What with slices of that plus the Sunday roast, you’d not think we were in lock-down. We skipped piano practice (sorry Caroline). All museums, galleries etc in London have closed. Typical, I’d bought memberships for the year. Even the London Eye has stopped. From the flat we could see a few people wandering around, nothing like the usual traffic but more than expected. The news showed queues of cars going to popular spots like Snowdonia and the beach.

Day 4. Monday 23rd March. Piano practice and exercises. We had a telephone conversation with our house sitters, who said they want to go back to the USA as soon as they can get their dogs certified fit for travel. We had resigned ourselves to remaining in London as we thought they’d want to stay in the depths of the country where they could bring up the drawbridge or batten down the hatches or whatever one does in deepest Somerset. Instead, we looked at going back imminently. George was happy with this decision as he was worried about going out and then bringing back infection whilst we were living in such close quarters.

JD had to find his car paperwork and get it back on the road. Although there’s a file called “car” it seems to have thrown out the logbook (actually one sheet of paper) in pique at being left alone. At 8.30 pm the PM came onto the TV (watched by 27 million people according to the statistics) and announced we would all have to stay at home. Not an order, but likely to become enforceable if we don’t start to be more sensible and “socially distance” ourselves. Would we be able to get home or would it be like The Philippines, with check points taking our temperatures and asking where we were going? If needed, we do have paperwork showing our home address.

And at this juncture I shall leave you for today. Will our intrepid adventurers manage to get home? Will the dogs and Captain Catt speak to them or sulk? Will Somerset be any different from London or will the pubs still be operating their own lock-ins (as opposed to lock-downs)? Stay tuned for the next thrilling instalment.