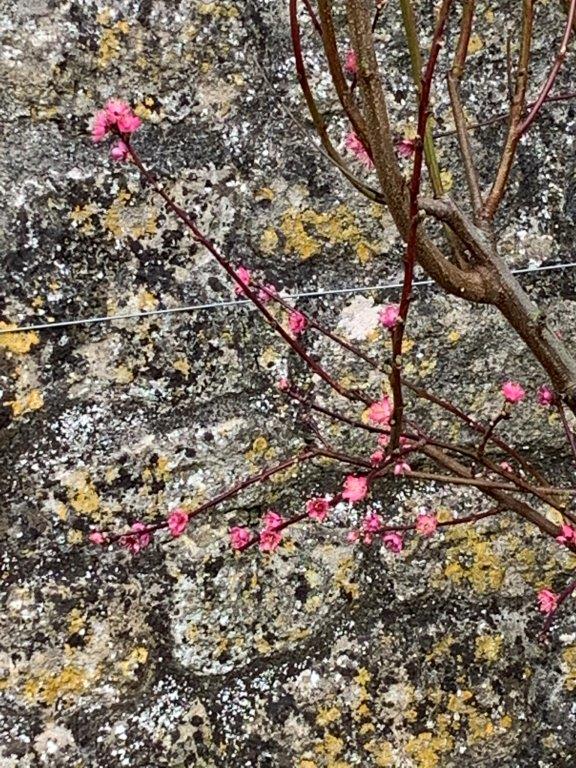 is meaningless, but I say it so that the other half may reach you. Bet you thought I was quoting John Lennon, especially if you’re called Julia, didn’t you? Before JL was Kahlil Gibran, the Lebanese writer who wrote ‘The Prophet’, published in 1923 and never out of print. Must find my copy and re-read it.

If you were unsure why I was saying Freedom Beckons in the last two blog posts, here are the four contrasting rules across the UK. No wonder we’re all so confused.

Yesterday was the early May Bank Holiday, started in 1978 (but not in Scotland). For those of you who don’t live in the U.K., this means it rained heavily, the usual weather for this holiday. To add to the excitement, we also had strong winds, continuing today. Oh to be in England now that April’s gone (to misquote Robert Browning). Poor tulips. I’m also worried about my peach tree, planted in the last year. It blossomed earlier in the year (see header), I’m hoping the April frosts didn’t kill it all off. Certainly all the magnolia trees around here were hit and look horrid and brown.

The previous night I had a dilemma, do I watch the F1 from Portimao and see if I recognise anywhere, or the BBC Young Musician 2020 final? Unlike (seemingly) the rest of Britain we have not watched one episode of Line of Duty so no point watching the final one. If I read about it in the papers I could probably pick up the story so far, there’s so much written about it. Almost as much as when the Duke of Edinburgh died. Possibly not as much as about Downing Street wallpaper though, with all the news on Wallpaper-Gate.

The young musicians won over everything else. I am so impressed, my piano playing will only ever be, as Jonathan Dimbleby said in The Times at the weekend, “for us, there is only the trying”, (quoting T S Eliot). Not only were they young and highly accomplished, the final had to wait for a year due to Covid, so they’d possibly moved on from the initial excitement and enthusiasm.

I’ve kept up my exercises, with a constant companion, although she doesn’t join with in the movements.

One night last week JD and I were quietly reading our books with Radio 3 in the background. Suddenly, he turned to me and said “I feel like someone should be offering me a glass of champagne and some nuts”. Well, what could I do? Once we were settled again, I tried to work out what had caused this urge. Was it his book? Unlikely as it’s about the history of religion and he was reading a chapter on Taoism. It wasn’t a Friday night so I’d not neglected to offer him a cocktail. Then the penny dropped, on the radio was the Flower Duet from Delibes opera Lakme. In case that leaves you stumped, it was used (possibly still is) by BA as their signature tune. I’ve found you a special version, not only can you sing along, but if your French is good enough, you’ll know what you’re singing about!

Before we move on, I must mention the American actress and comedienne Tina Fey. One of the Graham Norton episodes had her as a guest and she described an evening, which sounded hilarious, when her daughters cooked for her. I did not dress up as a stewardess and demonstrate the exits!

On researching this I also discovered that Spotify have a British Airways boarding music playlist, just in case you are really missing flying. It’s obviously quite short (four pieces of music) so you might prefer the British Airways Opera and Song High Life entertainment play list at almost three hours, plenty of time to eat your meal.

We were reading the papers another night when there was a scratching sound at the other side of the room. If we’d had the radio on we’d not have heard it. Polly went to investigate at the skirting board by the outside wall and JD went outside. Neither of them turned up anything so JD went into the cellar and knocked on the floorboards. The sound stopped, scuttled along in the gap, then came back. Adie went and had a good long sniff and then the sound stopped. Was it more cute rats or mice? Or, moles? We do have mole hills in the garden quite close to the room. I’d like to think it’s moles but tend to think it’s rats. The floor needs replacing anyway as it’s held up by Acro / Acrow props in the cellar. When we moved in, we were assured by the previous occupants that these were purely decorative. I keep threatening to turn it into a Dive Bar with a disco ball and other suitable accoutrements. I’ve got the drinks, after all.

I guess this is all leading me to this week’s cocktails. We have hit the letter V. I know that when we teach the children it’s V for volcano or violin. Not here. V is for Vermouth and Vodka. Not necessarily at the same time.

I’ve used Vermouth in quite a few cocktails. It’s either white (dry, French) or red (sweet, Italian). The name vermouth comes from the plant wormwood, which is an essential ingredient. A keen reader of this Blog will remember it being mentioned in Post 86 dated 7th April 2020 when I started all this cocktail malarky, as it’s the main flavour in absinthe. We were given a vermouth for Christmas (red, spiced, English) made by Sacred Spirits, a distillery started in 2009 in Highgate, North London. I’ve looked at their site and they make all sorts of spirits. I used it in a sloe martini: sloe gin, vermouth and lemon juice. I then made a second with orange juice as we’d run out of lemons. Not as good, no bite to it. How about a sloe negroni? Make a normal negroni (gin, Campari and vermouth) then add sloe gin. A little sweeter, preferable to me.

I use red vermouth to make my own Pimm’s. Supermarkets tend to have their own imitation brands and so do I, although I’ve not gone as far as giving it a name. Maybe Simms or Pamms? It’s a wee bit stronger than the stuff you buy so needs more dilution (especially on a hot summer day, which is when it should be drunk). Mix equal parts gin and red (sweet) vermouth with half the amount of triple sec. When needed, just add lemonade.

As I said in Post 122, Pimm’s No 1 is gin based. Although their website references No 6 (vodka based) they don’t seem to sell it, nor do they give much history. Much as I hate to do it, I’ve looked at Wikipedia to get more information.

I also undertook to find out about Corpse Revivers. Corpse reviver No 9 is the one I made way back last year (Post 88 dated 18th April 2020). I cannot find the other eight, regrettably. Here’s the best I could do, which has quite a few but not all numbered. It says No 1 should be taken before 11 am, and that up to four of No 2 should be drunk. Think I’ll miss those instructions out. I can recommend Diffords Guide for anything you want to know about cocktails, much more authoritative than me.

Almost forgot the other V, vodka. The cocktail I made used up ginger ale I’d opened for the rhubarb gin cocktail last week. This time I added Chase marmalade vodka, a really tasty version. I told you about Chase in Post 121 so I’ll spare you more information. I chose the cocktail partly for the relevant ingredients and partly for the name, Absolute Castaway. Don’t we all feel like that with no real travel happening? I didn’t take a shot of that so here’s me enjoying the sloe martini. Unfortunately, I decided to go ‘down with the kids’ and put wax in my hair to slick it down. Didn’t work when it was long and doesn’t work now either.