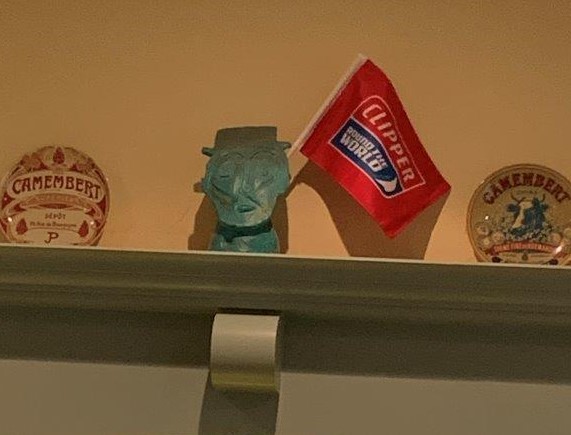 I promised some more photos of Portimao, there are some dotted around this Post. Also, before you sailors get too excited, despite the title, this is about life during Race 2, both theirs and mine, so it’s a pretty long post. Grab a cup of tea and sit down.

A correction to Post 49, it was not Cyclone Garry but Jerry. This was replaced by Karen then Lorenzo. Some of the boats in the fleet were hoping to hang onto the tail coats of Lorenzo and get a faster push into the Doldrums, but this didn’t happen. A good feel for this is given by Jody on Qingdao in the crew diaries. https://www.clipperroundtheworld.com/crew-diary/qingdao/278

The first two to start motoring in the Doldrums Corridor were Qingdao and Unicef. In addition, Qingdao had a problem with their generator so were burning fuel too quickly. Ha Long Bay and Sanya were diverted to perform a boat-to-boat transfer to them. They practiced this during training weeks: at that time I gather a tin of baked beans went from one boat to the other. Josh (skipper on Ha Long Bay) said he was going to ask for jam, peanut butter and Nutella in exchange for the diesel. What he actually received was some jam and a few Smarties! (Sanya had the promise of beers in Punta del Este when they arrive). Unicef are a bit more upmarket in the snacks they want us to bring out.

Eventually every boat motored for a spell, the last one being Seattle. As they can only motor for a limited period, there isn’t necessarily an advantage to starting at the beginning of the Doldrums Corridor and getting ahead of the rest if you then get stuck at the end and wave to the latecomers motoring past.

And while they’ve been battling the elements I’ve been enjoying London. Ironic really when you consider that John was the one wanting to live here and savour the sights. I’ve been to the V&A to see the Mary Quant exhibition, a bit of a disappointment after the Dior, but of its time. At Tate Britain the William Blake has just started so I went to that, the surprising thing is that his illustrations were so small as they were intended in the main for books. The development of his art was interesting as was the involvement of his wife and patrons. Imagine commissioning an artist to paint you 200 works of art these days! Although not commissioned, I did receive a personal journal made for me by my pal Sue (who also made me the amazing push-me-pull-you hat you saw in Post 44). This picture shows you the construction of the hat. You can see how it’s either Unicef or Qingdao depending how I fold it up.

Talking of which, in addition to the dual beanies knitted for the three Fs I now have two unique tee shirts supporting Qingcef and Unidao.

Well, the way the scissors cut it’s Qinef and Unicgdao but that’s too difficult to say. Look out for me at the start and finish of the races!

By Monday morning 30th September the first three ships (Sanya, Qingdao and Ha Long Bay) crossed the Equator and presumably held their ceremonies. I hope to hear about it in Punta del Este and let you know more, although some details are on the Clipper website in the Skipper reports or crew diaries. A lot of visits from King Neptune and sins recounted with baked beans and flying fish featuring in the punishments. There is a suggestion that some on Unicef had their head shaved. Will we recognise them?

Unicef supporters tried to have a glass of bubbly as Unicef crossed the Equator, we weren’t quite sure of the correct time so I think we started on Friday and continued until Tuesday, just to be on the safe side. My toast was during Sunday lunch with some other Unicef supporters at The White Hart, a pub about two minutes stroll from Waterloo station.

The rest of my weekend consisted of brunch at Bill’s in Victoria (I think my next brunch will be at Browns, as they offer Lobster Benedict), followed by a doggy birthday party which ended up in Mazar, a Lebanese restaurant in Battersea. The host of the party was Milo, a three year old Golden Retriever who is best pals with Clint, who you saw in Post 39. The owner of Milo, O M Faure, has recently published some books and very kindly gave me three. I started the first one on Sunday and have been reading the series in every spare moment, including on the Tube. The first is called “Chosen” and you can find it on her website, https://www.omfaure.com/.

This Monday morning I received a communication (my first) from JD on CV31! “Thinking of you, can you buy me a head torch (exact type specified, an Exposure RAW Pro) and a water bottle to attach to my life jacket (Spinlock)”. I’d already sorted out the head torch, Exposure suggested I go to Arthur Beale, an amazing chandlers close to Covent Garden on Shaftesbury Avenue. They had to order one so I said make it two as John has already gone through two and it’s only one month into the journey. Should I place an order for another 18? They don’t stock Spinlock and I couldn’t find said water bottle on the internet.

On the way to Arthur Beale I was waylaid by a cosmetic shop selling lovely hand and body lotions. I bought some for myself and an appropriately named hand cream, Ocean, to take to Punta for the workers. On the way back to the Tube I called into Brigit’s Bakery in Chandos Place for brunch. Wonderful looking cakes but I avoided them (this time!).

I mentioned the travel journal above, I’m sticking little mementos in it as I go along to remind me of the events, both abroad and in the UK. I’m sure it will appear a number of times over the months, here it is from the outside. It’s created from the book “Global Challenge”, a 1997 business management book based on the BT Global Challenge round the world race. The bookmark you can see poking out at the top is from Volume 1 of the Admiralty Navigation Manual 1938. It is the most incredible work of art.

Back at the race, the first three boats (Sanya, Qingdao and Ha Long Bay) are through the Ocean Sprint (Thursday morning 3rd October). As this part of the race is not first-past-the-post but the fastest passage, the points are not allocated until the last yacht is through, which may not be until Monday 7th October by current estimates. Imagine Your Korea has just entered the “course” and they could still win if the wind picks up for them. I gather that Unicef have squalls which are not helping their speed.

We are lucky enough to have thoughtful people back at home. Jane-the-gardener sent us some shots of John’s greenhouse. Look back at Post 36 in August to see a photo of the plants John put in before heading off to the wide wild blue yonder. These are from last week. Thanks Jane, a wonderful reminder of what we’ll be coming back to next summer.

It’s looking as though Sanya and Qingdao will be first and second into Punta, but we’ve been here at the end of the first race. We were wondering why Qingdao seemed to be so much slower than Sanya for much of the time, Captain’s Log Star Date 2nd October gives us a glimpse of what happened:

I’ll be in the air whilst the last part of the race is being run so I may not be able to tell you who won until I’m in Punta. The next dispatch from your own correspondent should be from sunnier climes than London, let’s hope it’s not another saga like the trip to Portimao! If anything exciting happens in the meantime, such as the Ocean Sprint Results, you may have an earlier post.