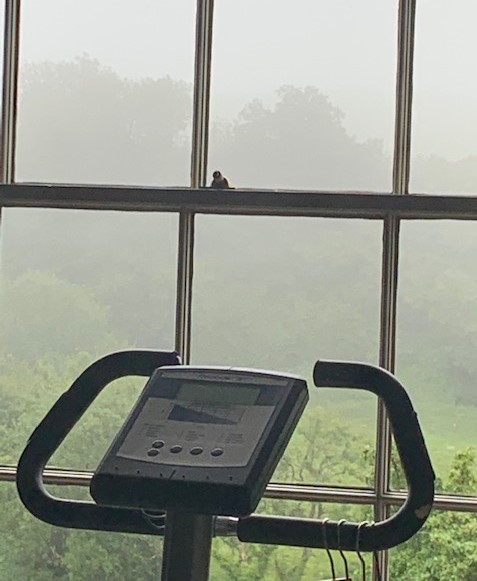 To slightly amend the country mentioned in the song. Barbados would be OK too. The boats should have sailed from New York on 27th June. I could have stayed an extra week there but thought long and hard before deciding I’d rather be in Bermuda awaiting the fleet. If they went according to previous legs, Qingdao with George would be with me now, enjoying the cocktails, and Unicef with JD could be onshore as well. Meanwhile, instead of sunning ourselves in Bermuda, George is in wet London and JD and I are in wet Somerset: go onto the net to see my header for today’s weather here. I’ve checked and it’s TEN DEGREES warmer in Bermuda. At least I can console myself that it’s cloudy there too. Look at the Clipper website link to see what I’m missing https://www.clipperroundtheworld.com/news/article/wish-we-were-there-one-year-till-clipper-race-visits-bermuda

Is it safe to put my head above the parapet yet? I hadn’t realised I had so many serious gardening followers. Maybe this is not the best book to use as my bible? I also need to up my proof-reading as I would only have removed 2.4 plants in my decimation, not 90% of them. I could argue that is exactly what I did by removing so many leaves.

The tomatoes are fine folks, growing like mad and threatening to have four trusses any time soon, so my next chance to wreck the harvest is on its way. Maybe you can help me with another question. We have two cherry trees, both planted by us, one Stella (good name!) and one Morello. I always thought Morello cherries were dark but not mine. They make great jam though, I’ve now got four jars in the cupboard to have with my scones or croissants. Please, not another discussion, it has to be strawberry jam on scones and apricot on croissants? Not in my book. In previous years the birds have had most of our crop but this year we’ve harvested loads from both trees, so the freezer is filling up as well.

For some of you the excitement last weekend would have been going to the pub as lockdown eased. For us, that has always been a spontaneous decision so choosing a pub and booking a table for our pint is not yet calling (besides which our favourite pub exists no more). However, JD went out on Saturday to collect our weekend takeaway and when he came home there was a distinct aroma of beer around him. He told me that, on his way back, he drove past a pub with an open door and no cars outside so he had to investigate and make sure they were OK. A spontaneous decision.

Prior to that, we went and had an outdoor pizza with pals: our first time out together so we had to remember where we had put our house keys. Nevertheless, despite all these events, our highlight of the week was The HairCut. Before you all follow me and rush out for a haircut, two downsides. Regrettably, I have bad news if you believed me (in Post 96 dated 21st June) when I said you’d lose your COVID stone by having your hair cut. Weighed myself before and after and here are the results: 1.2 pounds (nineteen ounces or just over half a kilo) lost. Not only will you not lose the COVID stone (unless it was very very long and you’ve gone skinhead), you’ll have a cold neck. As I’m an avid scarf collector, this is a great excuse to get them out. If you don’t like scarves you could embrace your “arty” nature and wear a black polo neck. The next morning, JD said “I can see your face again”. As he didn’t leap out of bed screaming I’m guessing this was a positive!

This week’s cocktail ingredient was Cassis. This is a liqueur made from blackcurrants, usually from France although we do have one made in the UK. Maybe Ribena is not as popular these days? Interestingly (or not), there was a European court case in 1979, as Germany did not like it being called a liqueur: it’s only 16% alcohol and Germany expect their liqueurs to be at least 25%. It is most commonly used to make Kir (with white wine) or Kir Royale (with champagne). I rooted around my cocktail recipes and found The Brindle. Take 120 ml gin (should be Bulldog, hence the name? Or maybe because the Cassis sinks to the bottom so it’s two-tone), 15 ml Cassis, 30 ml elderflower syrup (misread that and added St Germain Elderflower Liqueur, 20%) and 20 ml syrup (STILL the one with pear eau-de-vie). VERY alcoholic. It said to garnish with sage leaves but as our sage bush has gone to the herb garden in the sky, I used some from the freezer and it was actually garnished with scraps of sage leaves. It was enjoyable but possibly could have been diluted with something less lethal?

More good news this week, Adie behaved herself and caused no more consternation. There was a slight issue due to Adie’s ticks though. I ordered a dose of tick treatment from the internet, as it was not enough to get free delivery I added a number of treats and a box of Bonio, misreading the weight and so instead of 1.25 kg we have 12.5 kg. All our local pals with dogs have had a bag and I’ve still got enough for the rest of the summer.

Then Polly decided it was her turn for being the week’s news item. One morning I noticed she had her back to me. Oh no, I thought, what have I done to upset her this time?

A little later I noticed Adie examining behind the freezer and realised I’d not disappointed Polly, she was merely keeping a close eye on the freezer. (Aren’t cats so much more elegant than dogs?). We managed to rescue a mouse and release it into the woods.

As I’ve not had a photo of the lambs for a while, here they are, making the most of the compost heap before JD finishes the project and it’s all behind gates, as in the background here. I thought I’d shared photos of the project but I must be keeping them till it’s finished: look at Post 93 dated 25th May for the start and Post 91 dated 9th May to see a much smaller lamb in a similar position. Almost the only way to tell the lambs from the sheep is that the former are still fluffy.